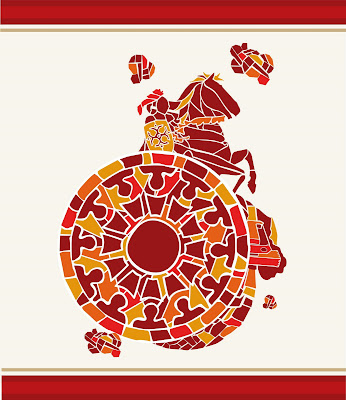 THE NATIVES OF THIS LAND affirm that in the beginning, and before this world was created, there was a being called Viracocha. He created a dark world without sun, moon or stars. Owing to this creation he was named Viracocha Pachayachachi, which means "Creator of all things." And when he had created the world he formed a race of giants of disproportioned greatness painted and sculptured, to see whether it would be well to make real men of that size. He then created men in his likeness as they are now; and they lived in darkness.
Posted by aeneadellaluna at 3:32 PM

Email ThisBlogThis!Share to TwitterShare to FacebookShare to Pinterest
Labels: Tales and Legends

I love this-- and the story is wonderful, too!
:D

I love this piece! Really great details, and an interesting legend to chose!!

great story.. its so nice to read different versions of how the world began..

Wow, the illustration is nice, but the story pushes me to interesting depths in the image. Very beautiful and inspiring.